Thanksgiving NFL Picks Against the Spread

It took about six weeks, but the Rockets finally hired someone to fill their coaching vacancy.

Silas, who's been in the NBA for 20 seasons now as an assistant, takes over for Mike D'Antoni, who resigned from his role after four seasons. And while there is talent at Silas' disposal, elevating this Rockets team to the next level to make them a contender and no longer a pretender, will be difficult.

The Rockets got bounced in the second round of the playoffs for the second-straight season, losing in five games to the eventual champion, Los Angeles Lakers.

This year's early playoff exit was the final straw for D'Antoni. The 68-year-old told the franchise he wouldn't be returning as head coach a couple days after being eliminated by the Lakers. A month later, Daryl Morey stepped down as general manager, and he's now GM of the 76ers.

His successor is Rafael Stone. The former executive vice president of basketball operations for the Rockets was promoted upon Morey's resignation and has been with the franchise since 2005. Stone's first major move as GM is the signing of Silas.

But now that the Rockets have found their guy, how will they improve their roster for next season? Surely they can't bring back the same squad as last season, right? The Lakers, Warriors, Nuggets and Clippers will be among the best in the west during the 2020-21 campaign, and Houston isn't beating any of those teams as currently constructed.

And with reports that the 2020-21 NBA season will begin as soon as Dec. 22, they'll need to move quickly if they haven't been already. But now that the Rockets have a new general manager and coach, let's focus on how they can maximize James Harden's prime before it's too late.

Hear me out: Russell Westbrook is a really good player. His athleticism, finishing ability, post-up game and one-man fast-breaks are impressive as hell. But he can't make threes at a consistent rate, he makes terrible decisions late in games and he's an average defender.

Oh, and he can't be on the floor when Harden is. It just doesn't work. LeBron James and company brought that to light in the bubble. The Beard needs spacing around him, and spacing only happens when there's shooters on the floor. Russ doesn't have that in his bag.

Last season, the former MVP Westbrook shot just 26% from three. In the playoffs, that number fell to 24%. In 57 regular season games (bubble seeding games not included), he averaged 27.2 points, eight rebounds and seven assists per contest. In eight playoff games, his scoring output dropped dramatically to just 18 points a game to go along with seven rebounds and 4.6 assists. The Lakers were daring him to shoot from the perimeter, and it paid off, as the Rockets point guard went 7-of-27 on such attempts.

If I'm the Rockets general manager, I'm looking to acquire a stud defensive big man who can rebound and protect the paint-or, a big man who can stretch the floor and be a perimeter threat. I've created some sample trade packages:: 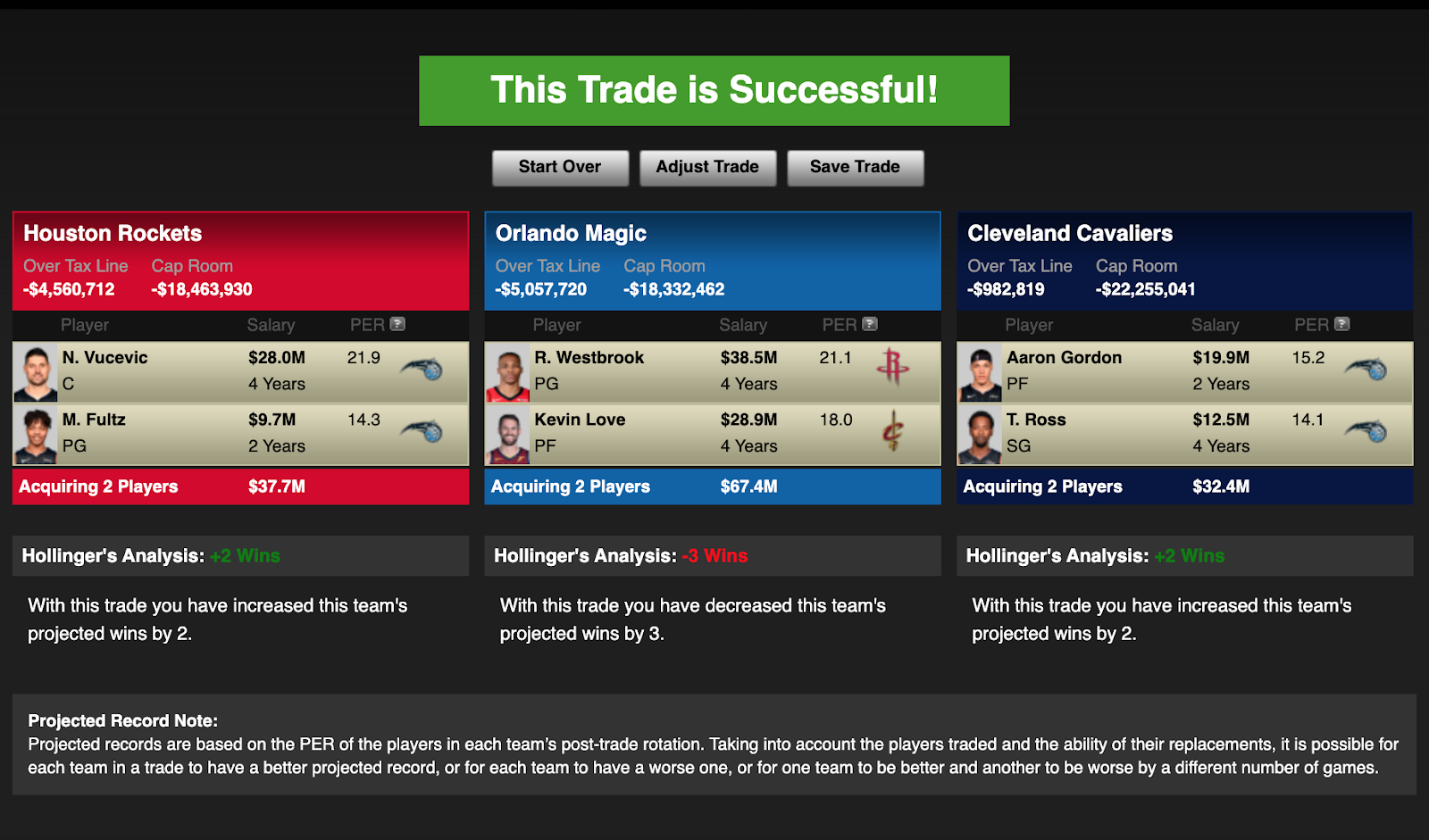 In this deal, the Rockets get versatile center Nikola Vucevic, who averaged nearly 20 points and 11 rebounds a game last season. He shot 34% from deep and is a quality passer, having recorded nearly four assists in 32 minutes a night.

Vucevic would give Houston a much-needed big man to battle against centers in the West like Anthony Davis, Nikola Jokic, Rudy Gobert and more. Point guard Markelle Fultz could be used as a sixth man for Houston, giving them a scorer and playmaker off the bench. The Magic would get two star players, who also happen to be former UCLA teammates, and likely a pick or two, and they can finally start Mo Bamba and give him a chance to develop. For Cleveland, they dump Love's contract and get two quality starters. 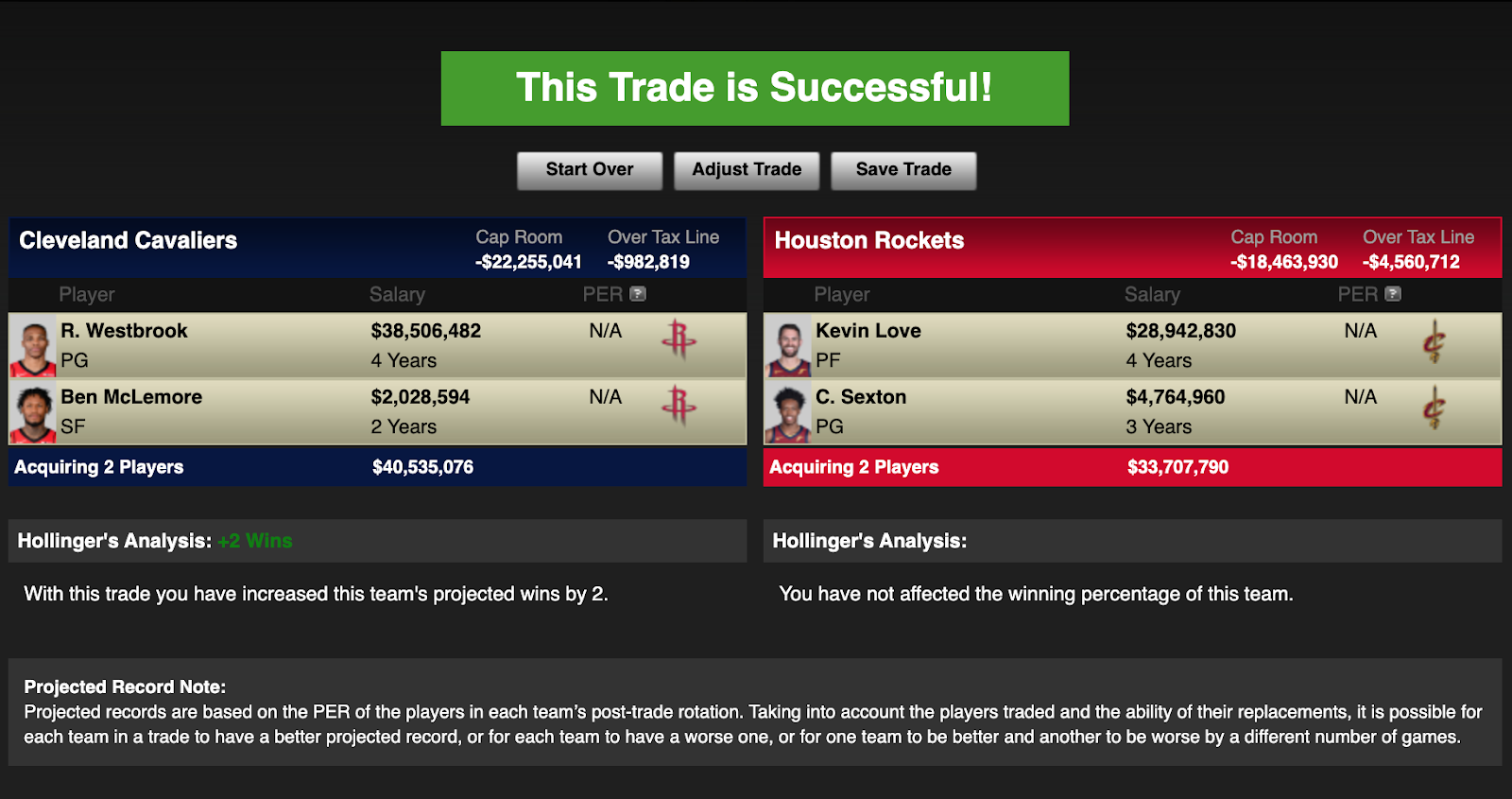 Houston would likely have to include picks in this trade also, in whatever year they still have some. But Kevin Love brings rebounding, shooting, finishing and passing to the Rockets' front court. He's averaged 18 points and 11 rebounds on 37% 3-point shooting so far in his career and won a title with the 2016 Cavs. Collin Sexton would give the bench a scoring punch when Harden is off the floor, and he loves to push the ball in transition which is optimal for Houston's shooters.

Now, if Stone and Silas want to hang on to Westbrook and run it back, there are some notable free agent targets they should consider this offseason.

The first player Houston should be looking at is Serge Ibaka. An 11-year NBA veteran, Ibaka is an unrestricted free agent coming off a superb season. In 55 games, the 31-year-old averaged 15.4 points and 8.2 rebounds on 51% shooting and 39% 3-point shooting. That's pretty good for a near seven-footer who records 2.1 blocks per game in his career.

Ibaka would give the Rockets floor spacing, rebounding, defensive ability and a PNR threat at the center position — something they need if they want to compete with the big dogs in the west. He also might be willing to come on a bargain deal if he gets a big role and a chance to add a second championship ring to his collection.

Cleveland is likely going to re-sign Andre Drummond after acquiring the former Detroit Piston via trade last season. This means Tristan Thompson will presumably test free agent, and the Rockets should give him a look. The nine-year veteran is just 29-years-old and recorded 12 points, 10 rebounds and a block a game in 2019-20.

Thompson isn't an outside threat, but he did make 9 of his 23 attempts in 57 games. Thompson, like Ibaka, is also an NBA champion, having won a title with the 2016 Cavs. He can match PJ Tucker's front-court toughness and at 6-foot-9 and 254 pounds, he can battle with both power forwards and centers in the league.

Despite previous rumors that Marc Gasol was heading home to play in Spain, he isn't. Not yet, anyways. But how much he has left in the tank is another question. Gasol is 35-years-old and on the back end of his career. Last season, he played just 44 games, averaging 7.5 points, 6.3 rebounds and 3.3 assists on 43% shooting. He did shoot 39% from the perimeter, however. If the 7-foot Spaniard wants to play in the NBA for a little longer, Houston could get him on a low-cost deal that could result in high production. The numbers aren't in his favor, but Gasol can still play and provides floor spacing and great passing ability at the center spot.

Houston has plenty of options this offseason, but it won't have much time to make the necessary changes before the season begins. Hiring a new coach a step forward, now the Rockets need to decide if Westbrook is in their future plans, and even Harden. Shams Charania reported the Sixers are interested in acquiring the 2017-18 MVP. Whether he's actually dealt remains to be seen.
From Your Site Articles
Related Articles Around the Web
houston rockets

Here's Who To Drop, Swap and Shop in Week 12

Unless you're the Pittsburgh Steelers, chances are your team is still uncertain about making the playoffs.

The Packers lost, yet the Saints won. The Seahawks won, but so did the Rams. The NFC is in a frenzy, while the Steelers sit atop the AFC waiting for everyone else to catch up. With only five weeks left, the playoff picture is a little fuzzy, but it clarifies with each game.

Likewise, fantasy playoffs are just on the horizon, and unless you're undefeated, there's a strong chance you're still clamoring for a spot.

If you need to make some moves for a playoff berth, here are some suggestions in this week's drops, swaps and shops.

Note: For ESPN Leagues, all public leagues must submit trades before the trade deadline on Wednesday, November 25th at 12 ET. Rules vary within leagues, but this could be your last week for swaps.

The Replacements Rule: Week 11 in The Weekly Assist

As Ferris Bueller might say: The world of sports moves pretty fast; if you don't stop and look around at least once a week, you could miss it.

Here we'll review what you might have missed in the past week all in one place. Why spend hours scrolling through Twitter to catch up on the news you want? We've already done that for you, so remember to check back every Monday to get your dose of weekly sports review.

Taysom Hill, Andy Dalton, and P.J. Walker all lead their teams to Week 11 victories filling in for injured starting QBs. Cleveland moved ahead of the Ravens in the AFC North with their win over the Eagles while Baltimore fell to the Titans. The Steelers continued to roll and now sit at 10-0 atop the NFL. The Colts outlasted the Packers in an overtime thriller as Indianapolis is now positioning themselves as a team nobody wants to see come playoff time as they boast the best defense in the NFL.

Joe Burrow was injured in the Bengals' game against Washington and he miss the remainder of the season with a knee injury. This should make Justin Herbert the odds on favorite to win Rookie of the Year if you're interested in a futures bet.

Russell Wilson scrambles in a win against the Arizona Cardinals.

At this point, I may never bet on the NFC West again.

At this point, I may never bet on the NFC West again. After losing to the Rams last week, Seattle turned around and beat the Cardinals on Thursday night. Every matchup in that division is a heavyweight bout and it's hard to justify betting on one when they can all throw a haymaker at any time. Meanwhile, the Bengals weren't ready for a D like the Steelers and the QB of the future looked stuck in the present reality for the time being.

As for our wins, in a shocking turn of events, betting against the Chargers WORKED! Or, perhaps, I should say betting on the Dolphins worked. Brian Flores looks more and more like he was the true key to the Patriots defensive success in recent years. He took on two NFC teams back to back and cruised against the poor, befuddled Chargers. Tua coming into his own has certainly helped, as well.

Brandon Aiyuk tallied a whopping seven catches down in New Orleans, even as the 49ers completely sputtered and blew a chance to upset a Drew Brees-less Saints. This continues a month long streak of calling player props, which is almost certain to end this week after pointing out its existence. *Fingers crossed* *No jinx* *Reverse jinx*

FanDuel DFS Is A Fantasy League For All Levels

FanDuel Sportsbook VS. Draft Kings: Which Is Better?

Michigan, FanDuel Sportsbook Is Coming To You! Here's Everything You Need To Know

Thanksgiving NFL Picks Against the Spread