Just How Good Is Ben Simmons?

The Suns One Win Away From History

Predicting Where Julio Jones Will Play in 2021

Kelly Oubre will be heading to Golden State this year

The draft saw a few trades that sent some familiar faces to new places and the free agency period is now open.

In less than a week, we've seen the defending champion Lakers acquire dynamic guard Dennis Schröder from OKC. Chris Paul is now in Phoenix with Devin Booker and the Suns. Jrue Holiday and, well, just Jrue Holiday, is joining Giannis in Milwaukee, and that's just a few of the big moves around the NBA so far.

But with all that excitement comes some bad news as well. Warriors star Klay Thompson tore his Achilles and will miss the entire 2020-21 season. This after the sharpshooting guard missed the previous season with a torn ACL. It's a tough blow for the Dubs as they sought to contend for a title this season, but without Thompson, the odds are against them. General manager Bob Myers wasted no time in bolstering the roster, however:

Kelly Oubre, within a matter of days, went from Phoenix, to Oklahoma City before finally landing in the Bay Area. Oubre will be joined by No. 2 overall pick James Wiseman.

Point guard Tyrese Haliburton fell into the Sacramento Kings' lap at No. 12 after the Iowa State product was projected to be a top-8 pick. LaMelo Ball will be playing in Charlotte, meaning we might get to see Lavar and Michael Jordan play 1-on-1 after all.

The Clippers traded Landry Shamet to Brooklyn in a three-team trade that puts shooting guard Luke Kennard in Los Angeles. Denver picked up RJ Hampton who could be the Nuggets' next Michael Porter Jr — a guy who was a former five-star recruit in high school and might be the steal of the draft.

But perhaps the biggest winner in this thrilling and unpredictable NBA week so far are the Philadelphia 76ers. No, they didn't get James Harden. But president of basketball operations Daryl Morey showed his worth Wednesday with these two moves: 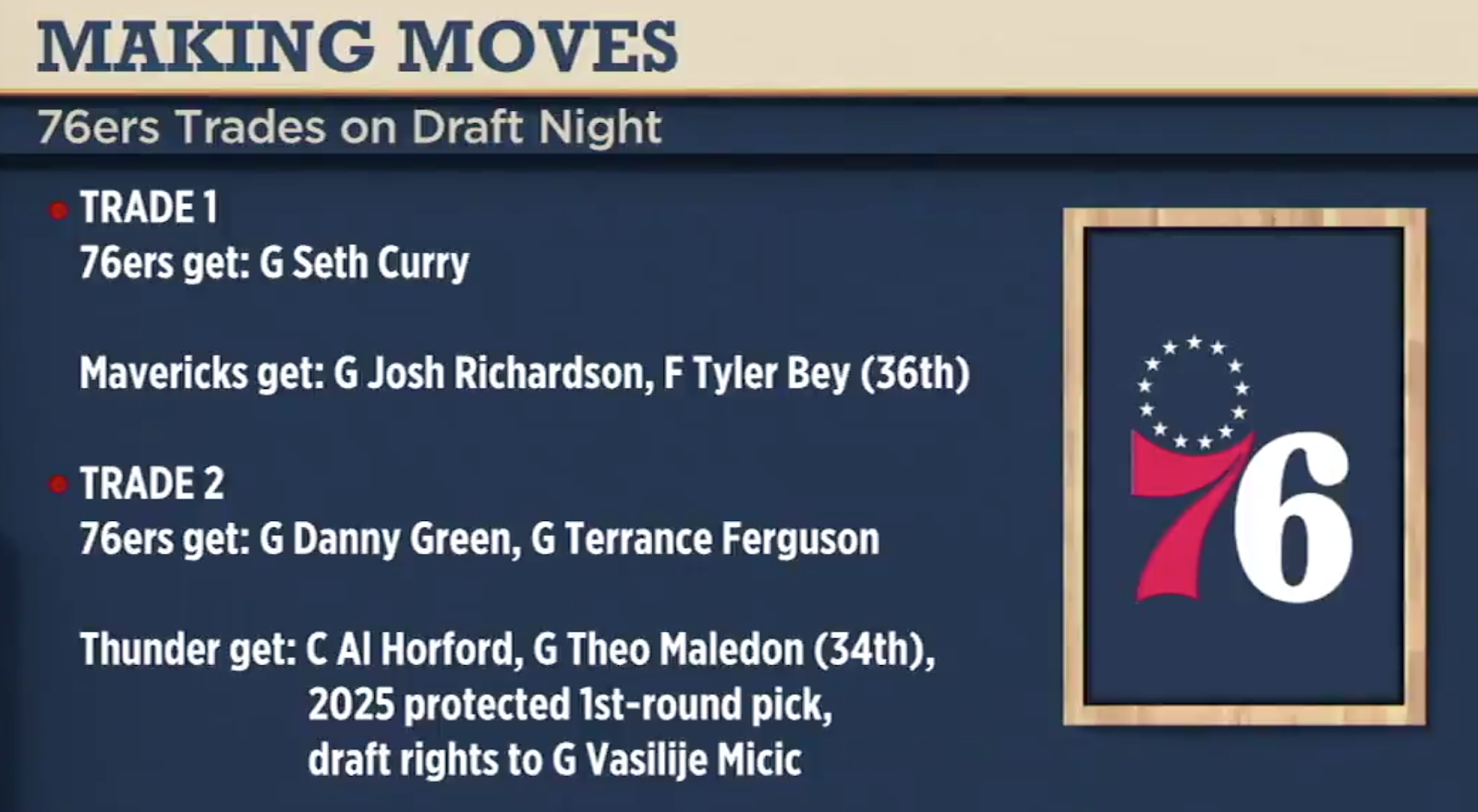 Morey cleared Al Horford's atrocious contract while adding a veteran 3-and-D wing in Danny Green, later adding an elite shooter in Seth Curry, a career 44% marksman. Surrounding Ben Simmons and Joel Embiid with perimeter threats is a recipe for success in an Eastern Conference that is rapidly improving.

Hell, even the Knicks took a step forward by drafting athletic and electric forward Obi Toppin, a Brooklyn Native. That was followed by shedding some salaries to clear up $40 million in cap space:

The Knicks have money to spend and there's players looking to get paid. This could end well for both parties involved, and Knicks fans might have something to look forward to after years of being a league laughing stock.

Celtics forward Gordon Hayward opted out of his $34 million player option to become an unrestricted free agent. You might think he's dumb for leaving that money on the table, and he might be, but Hayward is looking for a long-term contract, hence why his time in Boston ended. Hayward would give New York an effective playmaker, efficient scorer and veteran presence. He should be their second free agent aspiration, however.

Raptors guard Fred VanVleet, at just 26 years of age, is an UFA and is looking for a bag, he said so himself (:40 mark):

VanVleet and Hayward could bring the Knicks back to relevancy and maybe, just maybe, to the playoffs.

Other notable free agents who could be on new rosters soon include:

There's many more free agents than those listed above which is why these next couple days are going to be fun.

Wes Matthews and reigning sixth man of the year, Montrezl Harrell, are expected to sign with the Lakers. Bradley opted out of his deal with LAL as he's looking for a longer deal, and he might get it, but it might not be with the Lakers, as the Warriors will try to lure the defensive specialist to NorCal.

New Orleans will presumably offer Ingram the max money he can earn after his first All-Star selection last season. Joe Harris has reportedly gotten his payday from the Nets with a 4 year, $75 million contract.

The Hawks, like the Knicks, have a bunch of money to spend and could throw some to Rondo who's coming off an incredible championship run with the Lakers. The Clippers will also be in the hunt for the veteran point guard, per reports.

In a must win game for the Los Angeles Clippers, Paul George was finally able to look like the best player on the floor in a playoff game.

After a slow start, George poured it on in the second half on his way to a game high 41 points in Game 5. The performance elevated the Clippers over strong outings from the likes of Devin Booker and Chris Paul as L.A. outlasted Phoenix 116-102.

The Clippers don't have much time to bask in their win however as they have to turn around and play two more elimination games just to make it out of the West. The Suns jumped out to a 3-1 series lead as Los Angeles struggled to find their identity without Kawhi Leonard. If the Clippers are to stave off elimination any longer, George has to continue this level of play.

Just How Good Is Ben Simmons?

Ben Simmons disappointed in the playoffs this season

Following a Game 7 loss to the Atlanta Hawks, the Philadelphia 76ers and coach, Doc Rivers, are questioning if Ben Simmons is the right guy to be running their offense through moving forward.

Offense being the key word here.

Simmons is an all-world defender possessing the ability to guard virtually any opponent on the court from the perimeter to the rim. But it was his lack of offensive help throughout this playoff season that stood out beyond any accomplishments this year. Simmons joined Rudy Gobert as unanimous selections for the NBA's All-Defensive First Team this year and also finished fifth in the NBA in assists per game with 8.8 per contest.

The Suns One Win Away From History

The Lakers looked lost in the Valley

The Phoenix Suns are just a win away from sending LeBron James home in the first round of the playoffs for the first time in the King's illustrious career.

After stating that "These shoulders were built for a reason," James referring to facing the challenge of taking on added responsibilities after Anthony Davis was ruled out for Game 5, the Lakers and LeBron disappointed in a big way Tuesday night. L.A. started off hot jumping out to a 10-5 lead behind a couple shots from James and a three from Davis' replacement Markieff Morris. But it didn't take long for the wheels to completely fall off for the defending champion Lakers as they spent most of the first half trying to remember how basketball works.

Two numbers stick out in the Game 5 loss for the Lakers and those are 34.5 and 12. Los Angeles shot 34.5% from the field on Tuesday night and were minus 12 in turnover ratio. No matter who's on your team, if you can't shoot and you can't protect the ball, the outcome is already determined.

The Suns weren't simply beneficiaries of a poor performance however as the Suns put it on the Lakers early and often and they never let their foot off the pedal for 48 minutes. Phoenix ended with 15 more assists, had seven more combined steals and blocks, and outscored L.A. in the paint by 12 points. Devin Booker and Cameron Payne were spectacular and they seemed to hit big shots every time the Lakers appeared to threaten a comeback. Mikal Bridges was effective on both sides of the ball adding three steals and two blocks to help electrify his team with the defensive effort.

J. Cole Headlines the Kickoff to the Basketball Africa League

Teams Fight for Their Lives as Playoffs Near

Three Up, Three Down: Fantasy Baseball Players to Target