Picking up where they left off in 2018, the French National Team led by 23-year-old Kylian Mbappe have found their way back into the finals as they look to be the first back-to-back World Cup Champions since Brazil’s dominant runs in 1958 and 1962. Standing between that incredible feat for the defending champions is Argentina, who currently have their superstar, Lionel Messi, in top form. Messi is finding ways to create passes no one can see and he’s done it multiple times, assisting three goals (tied for the most) throughout the tournament. The legend is also scoring goals of his own and is tied with Kylian Mbappe (5 goals) for Golden Boot honors in this year’s World Cup. Regardless, soccer fans around the world are in for a treat on Sunday at 10:00 AM EST as two of the best players in the world face each other for their country’s World Cup glory. 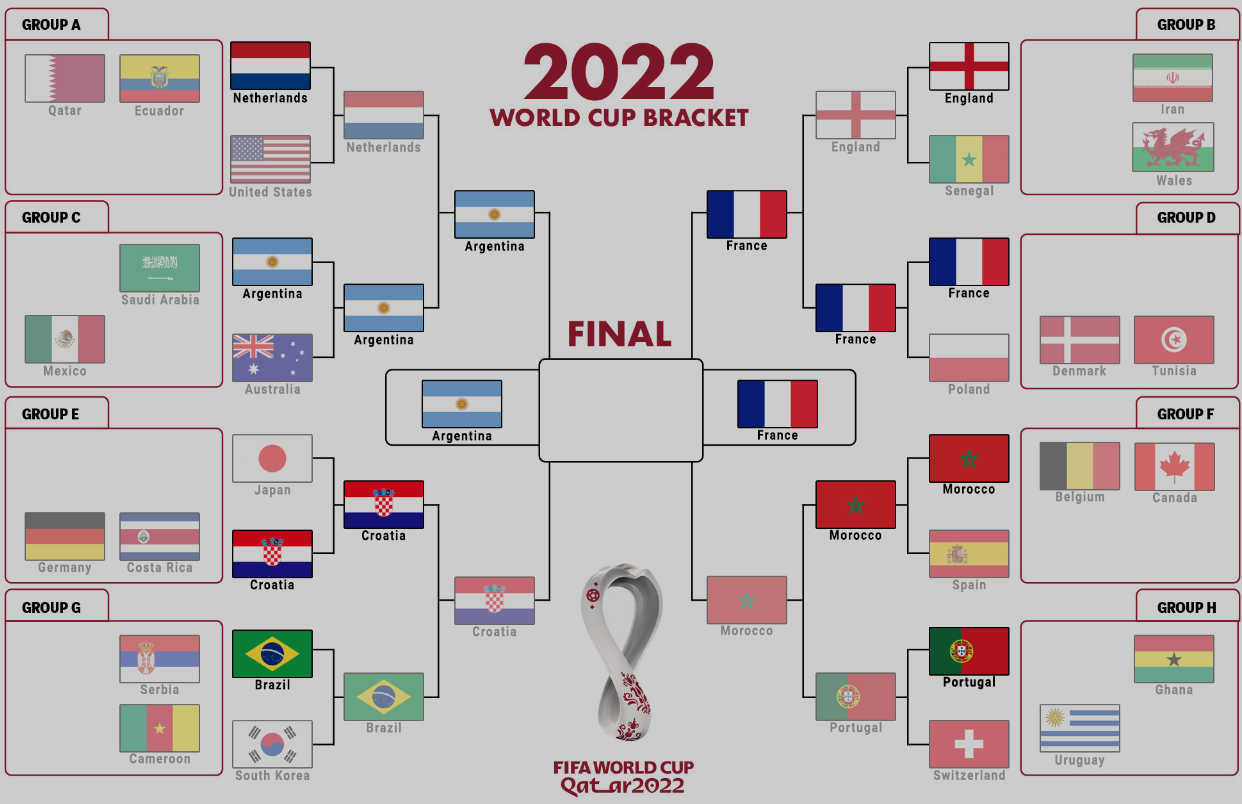 After winning Group D, France defeated Poland in the Round of 16, England in the quarterfinals, and a strong Morocco team in the semis to advance to the Final. On the other side of the bracket, Argentina won Group C and dispatched Australia in the Round of 16. Messi and the Argentinians were then tested in the quarterfinals, needing a penalty shootout to defeat the Netherlands after blowing a late two-goal lead. Finally, Argentina played perhaps their best match of the tournament against Croatia in the semi-finals, winning 3-0. Now the stage is set for a blockbuster finale between two powerhouses featuring some of the top players in the world.

Lionel Messi has played incredibly for Argentina throughout this World Cup. He is leaving opposing defenders in the dust, taking on multiple players at once, dragging them away from his teammates, which is opening up the field for his fellow goal scorers. Every time Messi has the ball at his feet, there seems to be more than one threat. Messi is playing just as well as he always has in 2022. He’s served his team as a playmaker and as a goal-scorer in Qatar. He’s also had some help from Manchester City forward Julian Alvarez who’s scored a handful of goals in this World Cup (including two in Argentina’s decisive victory over Croatia). If Alvarez and Messi are able to link up while on the attack, the depleted French defense and midfield could be in for some trouble.

One of the biggest headlines heading into this World Cup Final is the return of French striker Karim Benzema. The Real Madrid star and winner of this year’s Ballon D’Or hurt his hamstring in one of France’s first practices soon after arriving in Qatar. He flew back to Madrid where he immediately completed his recovery work which was set at three weeks from the time of injury. Right now, Benzema is flying back to Doha and could be starting for France in the final. At the moment, France’s HC Didier Deschamps has declined to comment on whether or not he will be including KB9 in the starting lineup. France’s ball movement has been excellent throughout the tournament, but their key to victory against Argentina will be efficient defense. Over the last few games, France’s defense seems to have slowed down. Not only will they need to stop Messi, but they will need to turn defensive stops into counterattacks. Mbappe and Olivier Giroud (four goals thus far in the tournament) will need to be electric on offense and test the Argentinian keeper. Antoine Griezmann may be an x-factor for France as he has three assists in this World Cup and was inches away from scoring against Morocco.

It’s only fitting that Lionel Messi will finally hoist the World Cup trophy in his last World Cup match. Expect him to score a goal and lead his team to victory in a tightly contested battle.

Mbappé has been relatively quiet over France’s last few games. Still, he is the main wing on France’s team who is capable of breaking down defenses through his skillful technique and ridiculous speed. He currently is tied with Messi for the most goals in the 2022 World Cup. If he isn’t able to score in this game, then expect him to at least make an assist. For France to win this one, the 23-year-old will need to have a big game.

Messi has stepped up his performance big time this World Cup. If you have watched Argentina play in this tournament, you know how crucial of a role Messi has played in the team’s success. He is tied for the most goals in the tournament with Mbappe and has a great chance of putting the ball in the net at some point during Sunday’s big match. This is a particularly great prop to target since Messi takes all of Argentina’s penalty shots and has converted four-of-five throughout the tournament.

Even if you weren’t satisfied with a tie against England, USA’s 0-0 draw against one of the strongest teams in the World was impressive. The USMNT plays like a unit of young studs, hungry for victory. Oh and by the way, it’s called “soccer”!

Iran has no chance of winning this game. The United States fought with energy against a strong British team. Veteran center defenseman Tim Ream was excellent on defense for the men’s team, making critical tackles against the English offense. Raheem Sterling and Harry Kane struggled to get open shots in the box against the US’s defensive line. Christian Pulisic has also played phenomenally, and it was Timothy Weah who was able to score America’s only goal of the tournament against Wales. A draw is a strong result for this young squad against England, who finished as runners up in the 2020 Euro.

With that being said, Iran was able to pull off a huge win over Wales in their second game of the competition. Wales did go down a man as a result of a red card in the match. In fact, Wales’ Wayne Hennessey was handed a red card in the 86th minute of the game, allowing Iran to score in the eighth and 11th minutes of added time. Obviously, Iran got lucky with a late red card to Wales, allowing them to play 11 on 10 ferocious offense in added time. Iran had just 38% of possession but finished the game with 21 shots while Wales had 62% possession in the game but just 10 shots. Obviously, the majority of Iran’s offense came very late in the game, allowing them to upset Wales in stoppage time.

To me, it seems evident that the US will quiet Iran, especially as they got lucky to take the win away from Wales, who had 501 total passes in the match to Iran’s 298. The U.S. should cream Iran in a game which they really would like to win.

In addition, you can expect the U.S. to score the first goal in this game. They have a stronger, hungrier team than Iran that got very lucky to score two goals against Wales past the 90th minute of regulation time. A red card allowed them to take advantage of more than 10 minutes of stoppage time and score two goals to beat Wales. Against the U.S., Iran won’t have it easy. They certainly will not score the first goal in this game because we will.

Are you psyched about the 2022 World Cup and endless soccer each day for the next few weeks? We certainly are. If you are planning on watching the games and keeping track of all the action in Qatar, here are some picks for the four group stage matches scheduled for tomorrow: Tuesday, November 22.

Are you new to sports betting or fantasy sports? Get all the resources and help you need so you can DOMINATE!

Without a question, this should be an easy win for Argentina. They are one of the favorites to win the 2022 World Cup as a result of their outstanding corps of forwards and midfielders. In contrast, Saudi Arabia likely has one of the weakest rosters in this year’s competition. For this reason, it could be interesting to look at some other props. For instance, you could consider taking Argentina to win and for a certain amount of goals to be scored in the game. Taking into consideration the mismatch and the potential for Saudi Arabia to score a consolation goal, you can roll the dice on Argentina to win and for five or more goals to be scored in the contest for +430.

Denmark is certainly the stronger team in this matchup. Tunisia isn’t a joke but ultimately, Denmark has elite players from around the world spread at different positions throughout their roster. Christian Eriksen is the feature player on Denmark's’ 2022 World Cup Squad. Tunisia has virtually no players competing at a tough international level. This should be an easy first win for Denmark’s national team, and a safe bet for you regardless of if you are an avid sports bettor or simply trying to keep along with tomorrow’s action.

Though both teams have solid rosters, the edge goes to the Polish national team. At forward, they have one of the most prolific goal scorers in the World over the last near-decade in Robert Lewandowski (Barcelona). The rest of Poland’s roster is sprinkled with players competing in the top European divisions. Mexico’s brightest players will be veteran goalkeeper Guillermo Ochoa (Club America), Andres Guardado (Real Betis), Edson Alvarez (Ajax), and Hirving Lozano (Napoli). This season, Lozano has produced three goals and three assists in 14 games for Napoli. While Mexico’s roster shows promise, Poland’s roster has much more depth. Neither team is the heavy favorite, but I'd put my money on the team with players who have more experience at a European club and international level. This is where Poland’s roster shines over Mexico’s.

Heading into their first World Cup game, the French national team has lost some key players. Both Paul Pogba (Juventus) and N’Golo Kante (Chelsea) were ruled out of the tournament more than a month ago as a result of their respective injuries. It was reported earlier this week that 2022 Ballon D’Or winner Karim Benzema (Real Madrid) suffered a hamstring injury practicing in Qatar which will keep him sidelined for the tournament. Heading into their first match of the group stage of the competition, France is missing three of its best players. Fortunately, they still have one of the most talented and deep rosters despite losing these crucial veteran players. In contrast, Australia is one of the weakest teams at the World Cup. Regardless of the hits the French national team has taken to their roster, “Les Bleus” should comfortably win this game by two or more goals.

As Ferris Bueller might say: The world of sports moves pretty fast; if you don't stop and look around at least once a week, you could miss it.

Here we'll review what you might have missed in the past week all in one place. Why spend hours scrolling through Twitter to catch up on the news you want? We've already done that for you, so remember to check back every Monday to get your dose of weekly sports review.